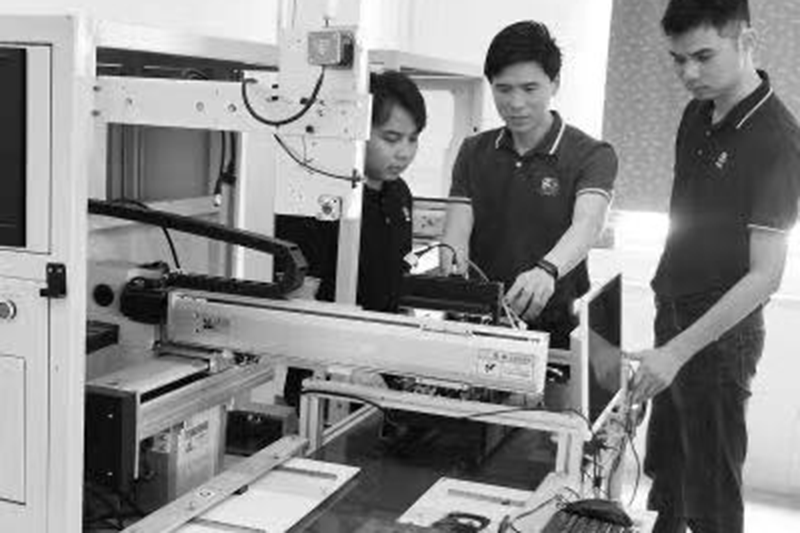 With the in-depth implementation of the construction of the Guangdong-Hong Kong-Macao Greater Bay Area, the economic and trade cooperation and cultural exchanges between Huizhou and Hong Kong continue to deepen, and more and more Hong Kong youths' entrepreneurial dreams are blooming in Huizhou. Recently, the reportJuly 1 marks the 25th anniversary of Hong Kong's return to the motherland. Huizhou and Hong Kong are located in the same Greater Bay Area. They are geographically close, people are close, culturally connected, and economically integrated. Hong Kong-funded enterprises play a pivotal role in Huizhou's economic development, and Hong Kong residents also make important contributions to Huizhou's economic and social development. 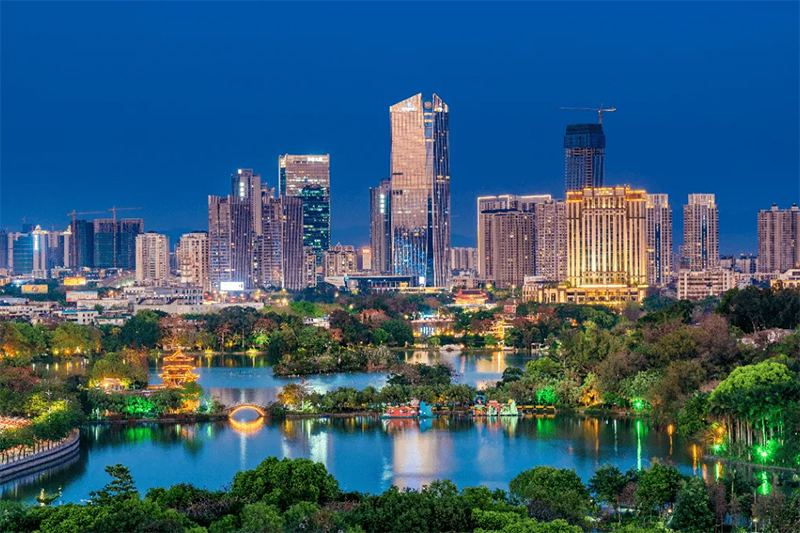 er walked into the Huizhou Zhongkai Hong Kong and Macau Youth Entrepreneurship Base, chatted with three Hong Kong youths, and listened to their stories of realizing their dreams and self-achievement in Huizhou.
Nanfang Daily reporter Mi Zhaoxia
Correspondent Liu Junjie

Deng Shengwei
Back to his hometown to develop industrial robots and became the "head" of the Hong Kong and Macau Youth Founding Association
Making a Transformer is the dream of many boys as children. Although Deng Shengwei did not create a Transformer that could save the earth, in Huizhou, he created a robot that could affect an industry.
"This is our robot, which helps enterprises to achieve breakthroughs in technology from 0 to 1." A few days ago, as a representative of Hong Kong and Macao youth, Deng Shengwei, executive chairman of the Zhongkai Hong Kong and Macao Youth Founding Association and chairman of Huizhou Xiangsheng Intelligent Equipment Co., Ltd., appeared on CCTV " Live broadcast of the Greater Bay Area • Huizhou", introducing their self-developed robots and telling their entrepreneurial stories in Huizhou.
Born in 1984 in Lilin Town, Zhongkai District, Deng Shengwei moved to Hong Kong when he was a teenager. After graduating from college in 2008, he decided to regain his childhood dream and make an ideal robot.
In Hong Kong, where land is expensive, high labor and rental costs discourage start-ups. Deng Shengwei turned his attention to the mainland. In his hometown of Zhongkai, Huizhou, the electronic information industry cluster has begun to take shape, and it has naturally become the first choice for starting a business.
He did what he said. He returned to Zhongkai with his homeland complex and established Huizhou Huixiang Industrial Equipment Co., Ltd., specializing in the development of automatic production lines and equipment in small household appliances, color boxes, speakers, automobiles and other industries, and devoted himself to the construction of his hometown. Do it for ten years.
There are both tax incentives to reduce the burden, and talent introduction to inject vitality, not only "through train" to solve problems, but also "industry-finance docking" to smooth the channel for transformation of achievements... In the process of more than ten years of entrepreneurship, Zhongkai has perfected the benefits of enterprises. Policies, abundant talent pool, and pragmatic style of government affairs made him feel the fervent care from his hometown, and the development of the enterprise has also been steadily rising.
The turning point of entrepreneurship occurred in 2020. Deng Shengwei decided to enter the intelligent equipment industry, develop standardized production equipment, and set up Huizhou Xiangsheng Intelligent Equipment Co., Ltd. with friends in 2021. "
After more than a year of research and development, our team achieved a subversive technological breakthrough last year, and independently developed an artificial intelligence device that integrates automatic assembly and visual inspection of waterproof and breathable valves." Deng Shengwei said that the device can be used in production. In the production of accessories for industries such as new energy, automobiles, and 5G base stations, the product qualification rate is as high as 99%, and the production efficiency will replace the labor of more than 12 people.
Deng Shengwei is not fighting alone. Established at the end of 2020, Huizhou Zhongkai High-tech Zone Hong Kong and Macau Youth Innovation and Entrepreneurship Association (hereinafter referred to as "Hong Kong and Macau Youth Founding Association") has 110 members, covering artificial intelligence, engineers, lawyers, accountants and other industries. Deng Shengwei serves as the executive committee. It has led to a large number of young people from Hong Kong and Macao to come to Huizhou for employment.

Zhang Junhui
Back to Huizhou and struggled for 14 years to catch up with the Times Express in the Bay Area:
In 2003, his family immigrated to Hong Kong from Huizhou; in 2008, he returned to Huizhou from Hong Kong to start a business. 5 years of going around in circles, why is this? The answer given by Zhang Junhui is "the times have changed".
In 2003, when Zhang Junhui left his native Huizhou, he was in his thirties. He came to the dream Hong Kong with the ambition of "doing a big job", mainly engaged in the export trade of plastic products.

However, the high site rent and labor costs, the cramped living environment, the high cost of living, and the ever-increasing business volume made Zhang Junhui feel "a big gap" and began to doubt his choice.

In 2008, Hong Kong, as a highly open economy, was hit hard by the financial crisis that swept the world. The hometown of Huizhou is experiencing unprecedented high-speed development, with the rapid development of urban construction and the rise of high-rise buildings.

At that time, Zhang Junhui calculated an account: renting a square meter of workshop in Huizhou is about 8 yuan, the labor cost is about 1,000 yuan per month, and the logistics cost has also been reduced a lot in recent years. Without much hesitation, Zhang Junhui resigned from the office in Hong Kong and returned to Huizhou with his family to look for opportunities again.
"As the country's emphasis on ecological environmental protection and policies continue to increase, I am no longer satisfied with simple trade, invest in Worldchamp (Huizhou) Plastic Products Co., Ltd., and begin to set foot in the field of plastic product production, producing disposable gloves, shopping bags, garbage Bags, aprons and other plastic products are mainly exported to Japan, the United States, Europe, the Middle East and other countries." Zhang Junhui said.

In recent years, Zhang Junhui's business has been getting bigger and bigger, but the sudden epidemic has caused his foreign trade business to suffer a short pause. Therefore, he closely followed the direction of national policies and began to develop and produce biodegradable plastics.Since September last year, he has been able to produce 100% biodegradable and compostable plastic products. The maximum production capacity can reach more than 400 tons per month, realizing export conversion to Domestic sales.

"Our biodegradable plastics can be completely degraded by microorganisms within 180 days under normal composting." Zhang Junhui introduced that all plastic products of Shixiang have passed the compostable and biodegradable certification, in line with EN13432 (EU), BPIASTMD-6400 and According to the requirements of D-6868, uninterrupted supply to Hainan, Shanghai, Shenzhen and other provinces and cities, and exported to more than ten countries such as the United States and Europe.

It is worth mentioning that Worldchamp (Huizhou) Plastic Products Co., Ltd. will complete the "small upgrade" and high-tech enterprise certification in 2020, and become a high-tech enterprise in Huizhou and an enterprise above designated size in Zhongkai District. Base, enjoy the "nanny-style" service of the base.

After returning to Huizhou and struggling for 14 years, Zhang Junhui bluntly said that he has caught up with the express train of the era of the Greater Bay Area - "Huizhou city has a new look, a solid industrial foundation, huge market demand, and many companies around them are expanding rapidly, we deeply feel this city. The vitality of vigorous development. Now, the dividends of the construction of the Guangdong-Hong Kong-Macao Greater Bay Area have just been released, and we are very optimistic about the development prospects of Huizhou.”

Wang Baidong
Developed an integrated packaging box to promote the reduction of white pollution
In Huizhou's innovation and entrepreneurial circles, "Box Sound" and its founder Wang Bodong are well-known.

Born in 1982, Wang Bodong is a native of Hong Kong. After graduating from university in 2005, his father and a friend started a carton packaging factory in Dongguan. After studying graphic design, he came to work in Dongguan with his father.

The turning point of Wang Bodong's career occurred in 2017. A customer who is concerned about environmental protection proposed the need to design an all-paper material carton, that is, a carton without plastic and foam but with cushioning and shock absorption.

As an environmentalist, Wang Bodong was deeply touched and saw the business opportunities, and began to think about how to superimpose the concept of environmental protection on traditional cartons. Inspired by traditional paper lanterns, Wang Bodong found that honeycomb paper is light in weight, less material, low cost, and shock-resistant and shock-absorbing, so he and two friends developed and designed a packaging box with a foldable honeycomb, which won the 2017 award in one fell swoop. International Red Dot Award.

Wang Bodong introduced that sticking honeycomb paper on corrugated cardboard can realize the integrated design of outer box, color box and buffer material, and achieve the low-carbon effect of weight reduction and plastic reduction. "I hope to redefine express logistics packaging through green packaging technology. process, advocate the new concept of green packaging for the public, and reduce carbon emissions."

"Tables and chairs, water, electricity, internet, and air conditioners are all available, and we settled in with a bag." Wang Bodong said, here, Boxyin enjoys the venue rent-free, accommodation subsidies, transportation subsidies, competition incentives, loan discounts and other policy support, and also There are various resource docking and exchange learning activities. "This takes the worries out of the start-up business and allows the entrepreneur to devote themselves to the work."
In order to enhance the popularity and application fields of foldable honeycomb packaging boxes, Wang Bodong actively participated in various types of innovation and entrepreneurship competitions and gained a lot of results. Last year, Wang Bodong took home the "Entrepreneurship Star" trophy of the 2021 Guangdong "Zhongchuang Cup" Entrepreneurship and Innovation Competition, and the first prize of the 2021 Lichuang Competition China Finals.

At present, the design has obtained invention

In response to the problem that young people from Hong Kong and Macao have difficulty in obtaining loans for starting businesses in the Guangdong-Hong Kong-Macao Greater Bay Area, the base actively cooperated with government departments and banking units to promote banks to launch unsecured start-up guaranteed loans. Wang Bodong became the first entrepreneur in Huizhou to obtain this loan, and was awarded 100,000 yuan unsecured low-interest loan.
"I am enjoying the convenience of a one-hour living circle in the Greater Bay Area. It is half an hour's drive from Changping's home in Dongguan to work in Zhongkai, and it is very convenient to travel to and from Hong Kong." Wang Baidong travels to and from Huizhou, Dongguan and Hong Kong all year round, and the Hong Kong company undertakes Order, Huizhou company is responsible for production. What makes Wang Baidong most happy is that Boxyin has a good start, with revenue of about 1.2 million yuan in 2021. Relying on the geographical advantage of the Greater Bay Area, its business covers Hong Kong, Shanghai, Dongguan and other places